Just another refugee from myDDO that might whine and moan about the game and such...

The woes of a fledgling Wiki editor...

Why, after I decide to update a page from the Wiki that was originally published at least 7 years ago, do the nit-pickers come out of hiding and change stuff that I just wrote?

If it was bothering them, they probably could have been the one to initiate the rewrite...

They did improve the page, but it is kind of frustrating for me.
Posted by Grand Moff Trojan at 4:41 PM No comments:

Long time, but not without gaming.

I have shelved Wytorimabor.  Ok, really I just pull him out to run new quests. He is within 300 Favor of reaching 5000, and I am happy for that.

My current project is with my current main toon, Slipperyfish. He is on his 9th life (I think) and I hope to get him up to a full completionist before too long.  He has surpassed the 5k favor mark twice, and I'm pretty happy with that.

I've also been doing some writing, editing, and inserting screen shots of stuff for the Wiki.  I am pretty sure that if you read this, you have also read some of my tripe over there too.

Have a wonderful day, and have fun storming the castle!

-- gmtrojan
Posted by Grand Moff Trojan at 12:36 AM No comments:

I know how much we B**** about how the developers nerf stuff when they install a new update to our favorite online games.  I also know that we can't get into one of the adventures that we paid for with MotU with the House Deneith purchase (Spies in the House).

Noting that: when I updated, I read that the things that were particularly tweeky with me were actually fixed.  1) Wytorimabor, my main character, now doesn't lose his hp when switching weapons with his shield on. 2) His stalwart defensive stance and defensive sweep enhancements show a real icon, instead of the (quite comical) "do not use" icons that had been there since the installation of the new enhancement system.  3) Slipperyfish, my rogue on Argonessen, doesn't have to reapply the envenomed weapons enhancement each and every time he goes into an adventure.  That was particularly making me grumpy, as I would have to work that much harder if I forgot... 4) They fixed the nerf-ed enhancement problems with drow and their racial enhancements deleting every time they adjusted their epic destinies.  5) I can now LR my 1 iconic hero that I created before update 19, so he can receive the proper feats associated with the LoB.

These are the 4 5 that I have seen/read that they have fixed.  Now if they actually made things worse, I have not seen it.  I can wait for them to reopen the nerf-ed adventure.  There is a lot for me to do anyway, I can wait, as long as they don't take too long with it.  Hopefully they can fix more things than they break in the future and upcoming "hot fixes" and such.  At least my list of things that bug me has gone down, instead of up after an update.

Also, I have received my Raid Boxes as was promised.  I am sorry if anyone reading this has had a bad experience with this new cookie.

What things should they fix next?  Which are most important?  Besides, of course, reopening the nerf-ed quest... go ahead be the first to tell me.

A long time in coming...

Today, I finally got the Devout status on Wytorimabor.  I know that this might not seem like much for some of you, but for me, having been about 13 favor from that point for about 6 months it is a relief to finally have it.  I only need to achieve the Yugoloth, PDK, and Harpers favor to be able to pick up all of the goodies that are available to characters that is available.  I am currently sitting at 3287 favor of the possible 4763 (ish) that is available. 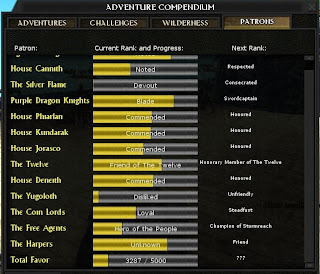 I don't know if I will ever make much more than this, unless the stars align and I am able to get the last piece of the sigil for Necro 4, and hop into a few epic elite raid groups, and I am able to muster up a few groups to possibly do the original GH raid on Elite and possibly get into the new raid...  Like I said, I need the stars to align...

Well, that is all for me as an update.  With school ending this next week, I will be able to play more, so maybe, just maybe, those stars will align and more will be able to be done.  Be well and safe, those that actually read this and enjoy your week!

--GMTrojan
Posted by Grand Moff Trojan at 5:14 PM No comments:

Quote of the Week

"Don't worry when you are not recognized, but strive to be worthy of recognition."

--Abe Lincoln
Posted by Grand Moff Trojan at 9:36 AM No comments:

The way of the Dodo

Good bye to the myddo lottery.  You were fun as you provided me with my first heart of wood, a bunch of Cannith crafting materials, and quite a few different (and mostly useless) potions.  I did believe, at first, that it was a bunch of BS, but I eventually won some festival coins, and then a bunch of other things came in to boot... But yes, it is leaving us tomorrow after the scheduled maintenance on Monday...

Posted by Grand Moff Trojan at 8:29 PM No comments:

Now, I know I didn't make this build, nor am I taking ANY credit for any of it, but this is the template that I am using for Slipperyfish.  I am just reposting it here, as it came from the forums, and we won't have the forums for much longer, I think...  If you know who, or are the original creator of this build, please give me a holler, and I will credit you.  Have a great day!

Tips:- You only gain proficiency with light repeaters at Level 6 (with the Mechanic I enhancement), which means that from L1 to 5 it is best to use a rapier (possibly with a shield that has zero Armor Check Penalty like a Light Mithral Shield). You may also use a regular crossbow, but your damage output will be significantly lower than with a rapier in hand.
- In order to make these early levels easier (especially if soloing), you may pick either Weapon Finesse (to boost your to-hit with a rapier) or Exotic Weapon Proficiency: Light Repeating Crossbow (to start using repeaters early) as your L3 feat. Once you reach L6 you can respec out this feat. Another option is to get proficiency in Heavy Repeaters and drop it only at L12, in order to be able to use both kinds of repeaters from L3 to L11.
- Once you get Mechanic I at L6, start wearing items that boost your Intelligence: your Int modifier is added to the damage you deal with crossbows.
- Use Diplomacy to politely ask your opponents to attack someone else. This will let you land sneak attacks more reliably.
- You do not have to sneak to land sneak attacks. Read this page for more information on sneak attacks (in particular, on ranged attacks you need to be close enough to your target).
- If you ever get to the point (around L16) where you start running the Shroud raid regularly, consider crafting a Radiance heavy repeater. It is a great weapon for such a build.
- Ultimately you would want to reach 39 UMD to be able to reliably use Heal scrolls. This can be achieved for instance from 23 (base skill at L20) + 1 (Skill Mastery) + 3 (16 Cha with +6 item and +2 Cha tome) + 4 (Greater Heroism) + 2 (Head of Good Fortune) + 6 (exceptional bonus from Shroud raid item), which are reasonable items to obtain if you get all the way to level 20. In the meantime, accept you may fail some checks and rely on your skill boost to make it less likely.
- As a Mechanic, you are the best at making traps, which you can do starting at L4. Read more about trapmaking here.

Variants:- I would like to thank Brennie and ReaperAlexEU for coming up with similar builds much faster than I did.
- It is possible to take the Mechanic enhancements as a melee build, for an example (now outdated though) see here.
- The last Rogue specialty feat at L19 can be changed e.g. for another Skill Mastery (+1 to all skills). From the information I could find on Opportunist and Crippling Strike, those would not work on ranged attacks and are thus not suited to this build (but I would appreciate if someone could confirm this information).
- The L18 feat on a Human can be replaced e.g. by Weapon Focus: Ranged (if you find your to-hit is not high enough), or Weapon Finesse (if you find you need to melee sometimes).
- Although overall the Bluff skill is currently not worth investing into, it may be improved some day. And if you are planning to solo a lot, it can be somewhat useful to land more sneak attacks. To get Bluff, split some points between Balance, Jump and Tumble (instead of just Jump and Tumble) so that you can max out Bluff. Among Balance, Jump and Tumble, Balance is the most important, while you can stop investing in Jump and Tumble once you are comfortable with respectively how high you can jump, and from how high you can fall without taking too much damage. Note that a 40 Jump skill (with buffs) is the maximum you need, and at L18 you can obtain a Jump clicky that gives you +30 to it. 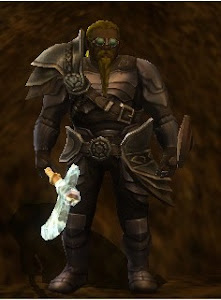